Where is the Money? 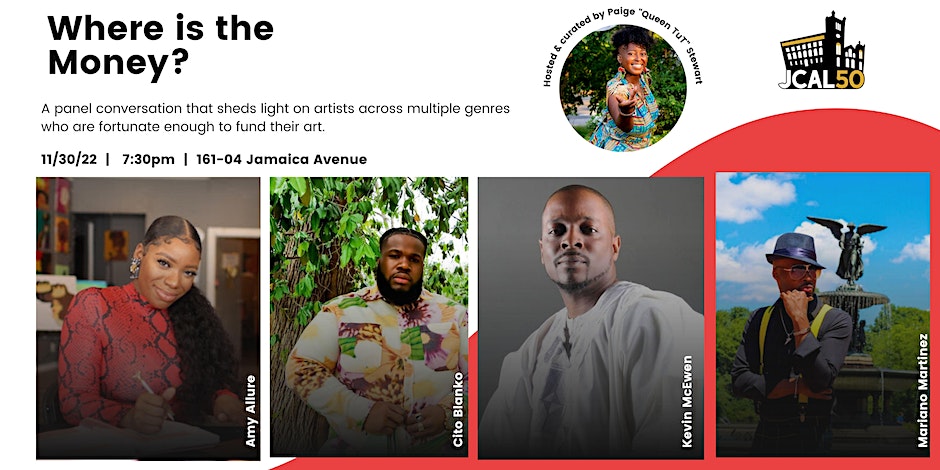 A panel conversation that sheds light on artists across multiple genres who are fortunate enough to fund their art.

Meet the Panelists below:

Amy Simon is an educator, artist, activist and owner of ALLURE ART STUDIO in Queens. She began painting at 11 and continued painting throughout life. Amy decided that she wanted to own her art skills and share her art with the world. In April 2019 she opened ALLURE Art studio to merge her love of art & teaching and encourage others to explore their own creativity. Allure art studio is a creative arts space where people go to learn & be inspired and network with like minded creatives. Now she hosts paint events and art classes for kids & adults and curates art shows at the studio to provide a platform for other artists. Her mission is to nurture creativity, confidence and culture in everyone through art.

Kevin McEwen – A Professor of Dance at Queensborough Community College, Kevin’s dance focus is in traditional West African dance techniques from the countries of Mali and Senegal. He is the Founder and Artistic Director of Kofago Dance Ensemble, an African Diasporic dance company. A graduate of the NYU’s Dance Education Graduate Program, Kevin is also versed in Afro Caribbean Folkloric, and various Afro-Modern/Contemporary techniques.

Cito Blanko is a poet and author from the Bronx. He published his first book 98sense in September 2019. Cito is a well-known poet at the famous Nuyorican Poets Café in NYC. He has partner with New York public library to give poetry workshops for the community. His poems have been featured in The Source magazine. He has also been casted to perform his poetry in indie films including April Again.

Mariano Martinez – Brooklyn born Mariano Martinez A.K.A @mariano_i_am first got his taste of dance while battling and free-styling on the Streets of the well known Himalayas at Coney Island’s Astroland Park. After winning several battles, he decided to try his hand at choreography. Putting his Caribbean background to use Mariano is not only well versed in Hip Hop. He also puts his knowledge of Salsa, African, House, Bachata, Dance Hall, Punta, Soca, and Street Jazz to great use, allowing him to teach internationally. Mariano’s work has been seen on Good Morning America, Fox5 news, and as far out as Central America and Korea.

Mariano’s choreography of the Gunchei successfully brought back the forgotten formal dance of the Garifunas; A culture whose Language, Dance, and Music was proclaimed a “Masterpiece of the Oral and Intangible Heritage of Humanity” by the United States Educational, Science and Cultural Organization (UNESCO). His contribution to the Garifuna culture through the amazing rendition of the once lost art of Gunchei, gained him recognition, including citations from city government officials.

Mariano is currently Head Choreographer for #JDoveDanceAcademy, a free dance academy open to all NYC youth. He also serves as C.E.O/President of J-Dove Productions Inc, a Quinceañera/Sweet 16 & Special Events choreography company. His dance training and tools reign from well know choreographers at Broadway Dance Center, Each 1 Teach 1, and Steps on Broadway.

Paige “Queen TuT” Stewart hails from Queens, New York; Working as a dance teacher at various public schools, dance schools and arts centers as well as all over the Tri-state area instructing youth, autistic children and also mentally disabled adults in movement & dance. She is also C.E.O. of The Kingdom Dance Company and the curator & Host of this Event! Please check her out on TheQueentut.com & @TheQueenTuTP.